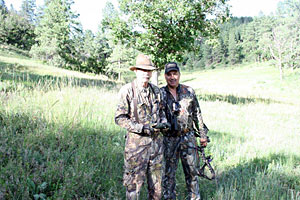 The Bar 5 Ranch Raton/ New Mexico is a host to 10,000 acres of prime hunting and is in the center of the historic two million-acre land grant known as the Maxwell Land Grant. It is encompassed by the nearly 600,000 acres known as Vermejo Park Ranch with no public access from any direction. It was recently purchased by a Texas business man who is an avid hunter with a never-ending passion for the outdoors. His aspiration is to preserve the integrity of the ranch and enhance its resources. With cooperation and guidance by the New Mexico Game and Fish department, existing wildlife habitats are being improved and new ones established in order to provide a suitable environment for the game to survive and prosper and for man to enjoy. With these measures in place and less commercializing of the ranch, it is now a destination for world class trophy hunts. The Ranch is home to a large resident elk herd shared with black bears, mule deer, mountain lions and turkeys, all trophy caliber. Elevation varies from a low of 7,570 ft. to a high of 8,062 ft. and branches out to mountains, gorges, and steep canyons. The Ranch boasts several lakes with a healthy population of rainbow trout, springs flowing through long meadows of lush green and pastures, all within a forest of ponderosa, douglas fir, blue spruce, oak and conifer. Bands of aspen trees adorn the outer line of the forest.

As fall approaches and temperatures begin to dip, a visitor can witness the landscape as it begins to transform to its winter setting. Oak leaves turn yellow before dancing their way to the canopy floor and blanket the fallen acorns and vegetation as a gesture of preserving it for the wildlife to find during the lean months ahead. Aspen leaves turn vivid yellow and shine like gold before the slightest breeze.

Scenic highpoints at the Ranch provide a great opportunity for a photo of panoramic vista of the Spanish Peaks and endless views of surrounding mountains. A romantic flash will pass through the most beastly of us.

All hunts include first class lodging and meals with a fine selection of wines to complement every meal. We take pride in what we do and our hospitality is unparalleled.

Our guides are professionals and the head guide who resides at the ranch has been hunting it for 25 years.

We also provide transportation to a nearby game processing facility and taxidermy.

Read a REVIEW by Wayne Carlton >

All who join us here at Bar 5 Ranch will spend five nights in a luxurious mountain lodge that can accommodate eight overnight guests. Single or double beds are available to suit your needs. Gourmet meals will be served with fresh, indigenous ingredients, and are included in the accommodation fees.

The open dining, living and kitchen area of the house is elegantly furnished and fully equipped. Enjoy the big screen television, quiet rooms, and homelike atmosphere. Many of our returning groups request the Ranch House because of its exclusiveness for group events. The Ranch House can comfortably sleep seven guests.

Our guests enjoy the gourmet meals and good conversation in our dining room and lounge. We pride ourselves on using the freshest ingredients available and presenting our guests with a varied menu featuring regional specialties and many unique wild game dishes.

THE HISTORY OF LUCIEN B. MAXWELL & THE LAND 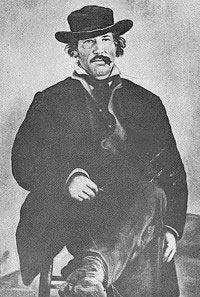 In the beginning the land was the undisputed territory of the Apache and Ute Indians, and later the Comanches. In 1841, just five years before the US Army arrived, Charles Beaubien and Guadalupe Miranda of Taos, New Mexico applied to Governor Manuel Armijo for the Grant, promising to encourage new settlers to come to the area and utilize its resources. Beaubien was a French-Canadian trapper who came to New Mexico in 1832, became a Mexican citizen, married a 16-year-old native girl, and opened a store in Taos.

Miranda was a gentleman from Chihuahua who had come to New Mexico on business and stayed; later he was appointed to several government positions including Governor Armijo’s departmental secretary.

The Maxwell Land Grant, also known as the Beaubien-Miranda Land Grant, was a 1,714,765-acre (6,939.41 km²) Mexican land grant in Colfax County, New Mexico and part of adjoining Las Animas County, Colorado. This land grant was one of the largest contiguous private landholdings in the history of the United States. The New Mexico towns of Cimarron, Colfax, Dawson, Elizabethtown, French, Lynn, Maxwell, Miami, Raton, Rayado, Springer, Ute Park and Vermejo Park, came to be located within the grant, as well as numerous other towns that are now ghost towns.

The lands covered in the Maxwell Land Grant were originally tribal lands belonging to Jicarilla Apache Indians. The region of northern New Mexico was claimed by Spain in 1524, but there were few settlements east of the Sangre de Cristo Range.

Lucien Bonaparte Maxwell was a pioneer, explorer and adventurer who married Luz Beaubien, the daughter of Carlos Beaubien. Beaubien hired Maxwell to manage his interests, and Maxwell and his wife settled in Rayado, New Mexico in 1849. In 1860, Maxwell built a large home in Cimarron, a stop on the Mountain Branch of the Old Santa Fe Trail.

Guadeloupe Miranda, who was living in Mexico, sold his interest in the Grant to Maxwell, Carlos Beaubien died in 1864, and Maxwell bought out the other heirs to the property. In 1858 Maxwell’s father-in-law, Charles Beaubien, paid a Santa Fe law firm to petition the Congress to confirm the Grant under the terms of the Treaty of Guadelupe Hidalgo.

By 1865, Maxwell and his wife were the sole owners of the entire land grant, and it was renamed the Maxwell Land Grant. In 1866, gold was discovered on Willow Creek in the Grant. There was a gold rush the following year, and many mining camps were established including Elizabethtown, New Mexico.

Senator Chaffee and the others who had purchased the land from Maxwell, almost immediately sold the land to an English syndicate for $1,350,000; and, just six months later, it was sold again to a Dutch Firm in 1872. The new Grant owners immediately began to aggressively exploit the resources of the Grant, opening a sales office at Maxwell’s old place in Cimarron. They waited for the customers to rush in, and they continued to wait. Faltering gold production and the shadow of Indian attacks spooked potential buyers. Meanwhile, folks who had already settled on the Grant were riled at the brisk way the new owners tried to collect rents.

Thanks to a variety of financial problems, the Dutch company went bankrupt in 1878. In the early 1880s, the United States sued the company for making claims of lands in the Public Domain in Colorado. In 1887, this case reached the US Supreme Court, and was decided as United States v. Maxwell Land Grant Company. The court’s decision affirmed the company’s ownership of the land. At this point, the settlers and squatters realized that they could not obtain good title to the land, and most of them left.

In 1902, William Bartlett , a wealthy grain operator from Chicago bought 205,000 acres (830 km²) of the Grant along the drainage of the Vermejo River. Under the agreement, he withheld part of the last payment until the Maxwell Land Grant Company evicted the last of the squatters. In his words, “They are given two years to get the Mexicans off and I hold back $10,000.” Bartlett’s Vermejo Park portion of the Grant has passed through several owners during the Twentieth Century. Pennzoil bought the Vermejo Park Ranch in 1973, and portion of the ranch known as Valle Vidal to the U.S. Government. This area is managed as a wilderness by the U.S. Forest Service. In 1992, Ted Turner bought Vermejo Park Ranch 590,823 acres (2,390.98 km²) from Pennzoil. Ted Turner did not buy the mineral rights, so El Paso Corporation produces oil and gas on the Vermejo Park Ranch, while Ted Turner raises buffalo.

In 1905, the St. Louis, Rocky Mountain, and Pacific Company acquired 500,000 acres (2,000 km²) of Grant land that it used mainly for coal production. Raton, New Mexico went through a boom as a coal town from about 1910 to 1920. Kaiser Steel took over the coal mining in1955. The Kaiser Steel properties at York Canyon eventually became part of the Vermejo Park Ranch.

In 1963, Norton Clapp, an officer of the National Council of the Boy Scouts of America, donated another piece of the Maxwell Land Grant to Philmont. This was the Baldy Mountain mining area consisting of 10,098 acres (40.87 km²).

The Whittington Center, founded in 1973, is the largest shooting and hunting complex in the world. It is owned by the National Rifle Association, and covers 33,000 acres (130 km²) of the Maxwell Land Grant.

During the 1900′s the land was gradually subdivided, and ranchers, loggers, and private organizations bought the property. Five hundred thousand acres became the hideaway home of Chicago grain baron, William Bartlett who built three mansions and a railroad for his guests’ convenience. Later 200,000 acres of the private retreat were purchased and became the Vermejo Park Club, whose members included celebrities and the wealthy, such as Mary Pickford, Douglas Fairbanks, Cecil B. DeMille, Herbert Hoover and Harvey Firestone. However, when the depression was evident, the club closed and the property reverted to ranching.

The Vermejo Park property and other lands, which totaled almost one million acres, were eventually sold to W.J. Gourley, a Texas oil man from Fort Worth. Mr. Gourley wanted to expand the existing elk herd and purchased several hundred elk from Yellowstone National Park for $5 per head. He also bred and raised wild turkeys to increase wild bird population. When Mr. Gourley died in 1970, the land was sold to the Pennzoil Company for a bargain $26 million. Pennzoil donated 100,000 acres to the Forest Service in 1982. Now, part of the original land is owned by media magnate Ted Turner.